Here at OLIVER, we sit up and take note when a brand deploys an innovative marketing approach to tackling their most pressing business problems.

In the financial services sector, these are:

So based on these three criteria, we’ve thrown together a list of financial services content marketing campaigns that we think merit a little round of applause.

There’s nothing revolutionary about the way that Kabbage does content marketing; it’s just done really well.

Where you’d normally expect to see “Blog” at the top of the site, you see the “Resources” tab. It’s a goldmine of useful information for small and medium size enterprises – some based on Kabbage’s core business of lending and finance, but others which are simply useful and interesting to their target audience. “How to be More Productive at Work” and “How to Choose a POS System” are just two examples.

Neatly categorised, attractively presented and regularly updated, this website has reasons aplenty for people at small businesses to keep coming back to read, research and download.

This audience might have no intention of applying for a loan – but if they ever did, Kabbage would be at the forefront of their minds. 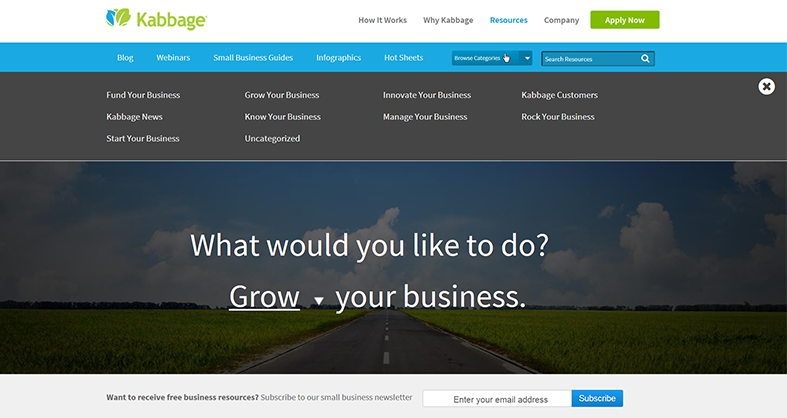 In the US, B2C tax services are big business.

One industry player is the Kansas-based H&R Block, a company which took a novel approach to securing more adults as clients: marketing to kids.

The solution was the annual H&R Block Budget Challenge – now in its second year – provided as a free teaching resource for schools looking to promote financial literacy amongst students.

The program was based on simulations of real-life financial challenges faced by adults, and the company also put $3m in college grants up for grabs for the best-performing students.

It’s going to be several years before H&R Block see the impact of this campaign; but in terms of winning trust through a long-haul content strategy, it seems like a great example.

Loyal3 is just one of a number of startups that have sought to make trading accessible to the masses through accessible tech.

Why Facebook? Well, Loyal3 largely deals with consumer-facing brands: the kinds of brands which already own a significant amout of the space and time which consumers spend on social media.

For the consumer, this helps to make their first forays into trading that little bit more familiar – and also means that if Loyal3’s standalone smartphone app gets deleted, they don’t lose touch with the consumer.

Four years after launch, Loyal3 is still ticking over. In the fickle world of startups, that counts as a success.

That’s the factor to which AdAge attributed the success of American Express’s campaign to capture a wider share of the SME space.

It was grounded in the popular belief that it’s important to support small businesses – so to this end, AmEx dedicated a day in the calendar to the cause, and began distributing resources to help local businesses capitalise on the day to draw attention to themselves.

The brilliance of this campaign is that consumers and business did the groundwork themselves, massively reducing investment against reach.

But it’s also worth noting that this was an omnichannel success: web, social and offline covered and connected – both at the point of distribution by the brand, and at the point of implementation by target audience.

Atom Bank: Design Your Own Logo

The UK has recently witnessed the rise of “challenger banks”, seeking to subvert the sullied aspect of traditional banking with more consumer-orientated business models and friendlier branding.

For Atom Bank, this meant giving customers to design their own brand logos – amidst a host of other personalisation options.

This is known as in-product marketing, whereby the product not only serves a purpose, but the experience of using it offers up constant subtle reminders to the consumer that they’re engaged in a relationship with a brand.

Coca-Cola and Nutella have already set a precedent here with their name-branded packaging, and it seems likely that if challenger banks really are to challenge traditional institutions, marketing tactics such as this will be part and parcel of their success.

Mahi FX: You vs. John Paulson

Some marketing is just too cool to ignore.

Forex trading firm Mahi FX recently launched an online trading platform – but that wouldn’t be immediately obvious if you stumbled across their latest market campaign which was this bit of interactive webspace.

This is definitely a case of reach over conversion: as far as we know, none of the people who were pinging this round OLIVER’s office actually began live trading.

The point is, though, it’s attracted huge numbers of new eyeballs to what for many is a mysterious and unfamiliar industry, through something quick, easy, bite-size and fun.

And you do get a free practice account, after all…

A great lesson here in fast marketing from Mondo, the second UK challenger bank in the list.

The public vote for their new brand name plays off same the personalisation trope employed by Atom; but the spark of magic was Mondo’s announcement that “Banky McBankface” would be off the menu.

In light of the recent “Boaty McBoatface” debacle, this added a dash of currency and relevancy for everyday British consumers and won a healthy dose of PR coverage

The ability to deploy marketing strategies as a quick response to cultural phenomena is known as “meme marketing” or “real-time marketing”. Wherever this idea came from, it can’t have been planned far in advance, and exemplifies a sea-change in the relative importance of expensive ATL, and little bits of marketing deployed quickly, cleverly and at just the right time.

When your brand is already known by your target audience, below-the-line engagement efforts become all the more valuable.

Over the course of a year, WU ran a social campaign to identify the real, modern, American dreams. They turned out to things such freedom from debt, college tuition, and down payments on homes – things which Western Union was able to offer as prizes.

Just like Kabbage’s business-facing Help Your Customer Grow campaign, this wasn’t about a product offering, but the common values of a target audience.

It’s also worth noting that it was a seriously long-haul effort. One Tweet does not a marketing campaign make; but as this campaign proves, wholesale social media efforts scaled across online channels and communities can deliver very real rewards.

Do you work in financial services?

If so, you’re in good company – because so does OLIVER. Our unique inside agency model already delivers more work, better and faster, for some of the world’s biggest financial services brands – and some smaller ones as well.

Want to find out how OLIVER can revolutionise your marketing? Watch our AXA case study below, or get in touch today.

Here at OLIVER, we sit up and take note when a brand deploys an innovative marketing approach to tackling their most pressing business problems. In …